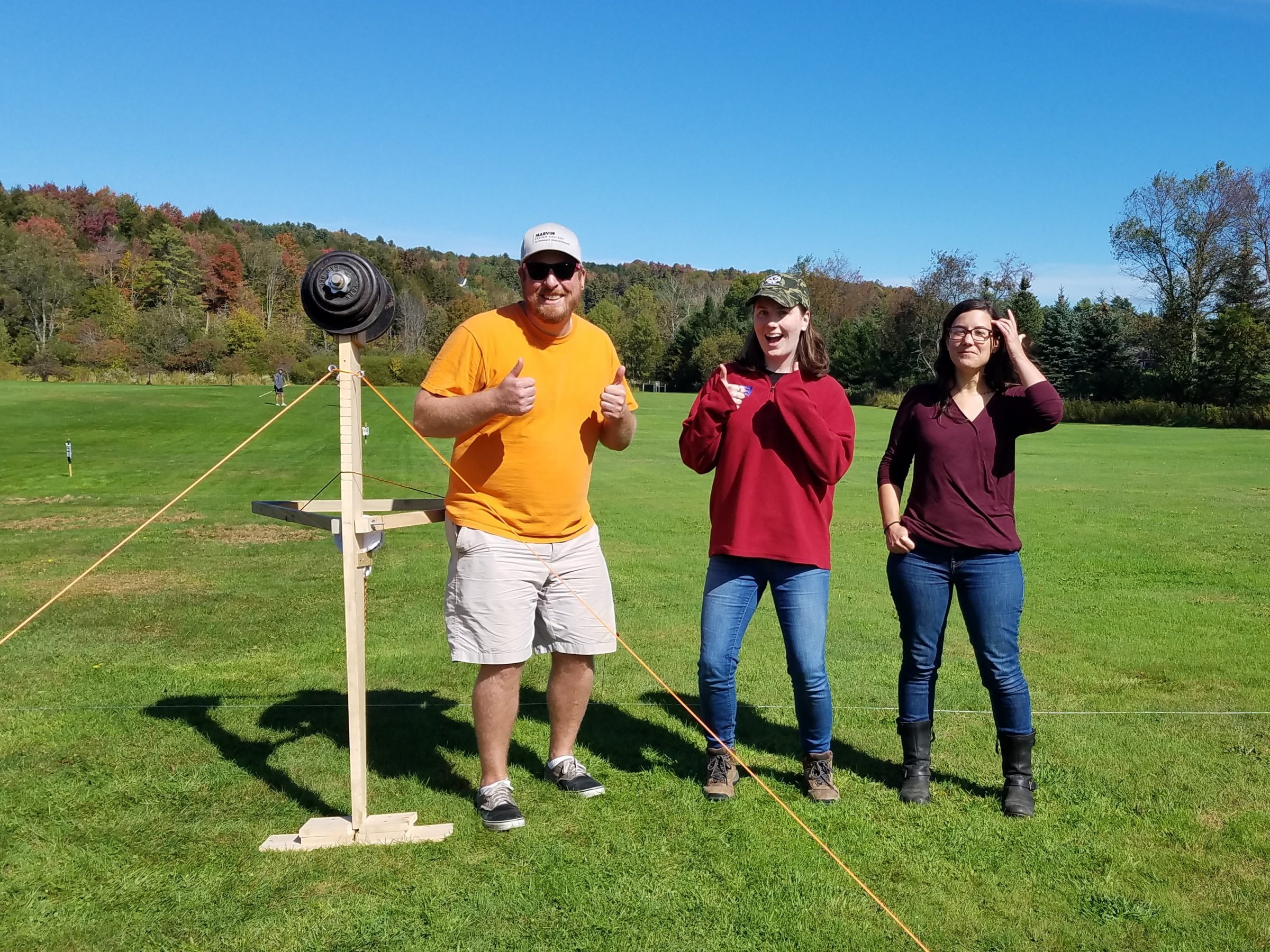 On Sunday September 29, 2019 the sun was shining and the air was crisp in the mountains around Stowe, Vermont. The early fall foliage was rustling in a light breeze. All was calm and peaceful. But, not for long! The field behind the Stoweflake Mountain Resort was preparing for a bombardment of epic proportions.

A team of Civil Engineers and Admin at EV got together to build and fine-tune a trebuchet for the Vermont Pumpkin Chuckin’ Festival. Over the course of two weeks, Tyler Barnard, Julia Ginorio, Paul Boisvert, and Katherine Rudzki built a “walking arm” trebuchet. A physics teacher in Vermont, Mr. Jonathan Stapleton, developed this style, and he competes in this festival with his son every year using his design. Though the walking arm trebuchet looks almost nothing like what might have been used centuries ago, it is effective at flinging pumpkins farther than most other styles of similar weight classes.

Team EV developed a few modifications to the original trebuchet design including enforcing the corners of the triangle with struts and staggering the weight towards the rear of the arm. These modifications would ensure the triangle wouldn’t break easily upon impact and the arm would have more power during its follow-through swing. Other than that, it was just a matter of fine-tuning the angle of impact and the weight before the competition.

On the day of the festival, the team arrived to set up their trebuchet and scope out the competition. There were the usual suspects – Mr. Stapleton and his son both sporting their walking-arm trebuchets, and a few others who have competed in years past. Despite the walking arm trebuchet endorsement in the official Vermont Pumpkin Chuckin’ Festival blog, there were plenty of other wild designs on the field!

Team EV decided on a name on the fly: Walker Texas Flinger, paying homage to the name of the trebuchet design. The first two throws were decent. The first went 160 feet, and the second flew into a stand of trees off to the side 220 feet. But, the last throw put EV on the map! After shuffling around weight on the arm more towards the rear, the projectile flew an incredible 290 feet!

At the end of the day, EV won 2nd Place in their weight class, and 3rd Place overall!

Will Team EV fine-tune their design for next year’s competition and beat their own record? Stay tuned!